22 May 2012
Comments Off on Famous Blackpool People 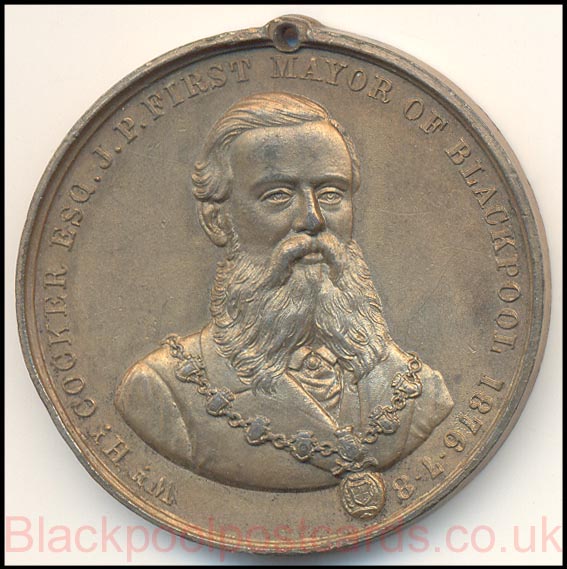 An Evening Gazette feature about William H Cocker, with extracts from Ted Lightbown.

William was born on December 9th 1836 in a house built by his father at Hygiene Terrace on the promenade where the Lewis’s store was located a few years ago, later Woolworths, now T.J. Hughes. In 1858, he married Betsey Pilling of Rochdale, who died in 1908. Their marriage was childless, as was his brother’s. William’s father was Dr John Cocker, who came to Blackpool from Tockholes, near Darwen, in 1828

He too had been a Blackpool pioneer, erecting the resort’s first public entertainment hall, the Victoria Promenade, in 1837. It survived at the corner of Victoria Street and Bank Hey Street until demolished just 11 years ago. It is now the site of a fancy jewellery shop. John Cocker married Jane, the younger daughter of Henry Banks, whose estate stretched up Church Street in the early years of the 19th century. In 1851, Dr John Cocker bought Bank Hey House at the top of Victoria Street. In 1875, three years after John’s death, William was able to offer his late father’s house and other former Banks’ land for the site of the Winter Gardens and, in fact, part of the 1846 house survives inside the Winter Gardens today

It became the site of the Tower and the aquarium was incorporated into the Tower Buildings, an area which survived until Merlin’s current work of turning it into a dungeon attraction. The fish and other aquatic creatures are said to have gone down the promenade to the Sea Life centre

The man who was Blackpool’s first mayor and first freeman died on Good Friday April 14th 1911, and was buried on April 18th. Buried at St. John’s church in the town centre, and relocated during recent work in the area known as St. John’s Square

His philosophy was that money was there to be used, and he spent much on entertaining, most famously when he picked up the tab for the lavish banquet held for the Lord Mayor of London and the mayors of 68 towns at the opening of the Winter Gardens in 1878

Having once lived in large bungalows on Bond Street and at Bloomfield Road, now the site of a Lidl store, he ended up in relative poverty in a modest house on Whitegate Drive

Blackpool received its Charter of Incorporation and became a Municipal Borough on January the 21st 1876 and “Progress” was chosen as the town motto.

Zoë Louise Ball (born 23 November 1970 in Blackpool, Lancashire)is an English television and radio personality, most famous for becoming the first female host of the BBC Radio 1 breakfast show and for her earlier work presenting the 1990’s children’s show, Live & Kicking

Lennie Bennett (26 September 1938 – 8 April 2009) was an English comedian and game show host.  After attending the Palatine Secondary School in Blackpool, Bennett became a journalist for the West Lancashire Evening Gazette before becoming a professional entertainer and appearing on The Good Old Days in 1979. Bennett starred in the Lennie and Jerry Show with Jerry Stevens. It ran from 1978 to 1980. He was also the host of Punchlines and Lucky Ladders in the 1980’s

Chris Lowe (born Christopher Sean Lowe, 4 October 1959) is an English musician, who, with colleague Neil Tennant, makes up the pop duo Pet Shop Boys. Chris attended Arnold School, an independent school in his home town of Blackpool, Lancashire. He also worked in the Solarium. While there, Lowe played trombone in a seven-piece dance band called One Under the Eight, that played old-time favourites like “Hello Dolly”, “La Bamba” and “Moon River”

Owen John Oyston (born in County Durham in January 1934) is a controversial self-made multimillionaire English businessman who is the majority owner of Blackpool F.C. At the age of two, Oyston’s family moved to Blackpool. He was educated at St. Mary’s Catholic College. He left school at sixteen and started his career as an actor. He briefly starred as a barrister in Granada TV’s 1970s afternoon television courtroom drama series, Crown Court.